While exploring the darkness in others, Detective Alicia Raymond discovers her own.

Chicago Detective Alicia Raymond, a.k.a. Berg, medicates her deeply buried depression and a brutal past with an obsessive desire to track down killers. Bringing murderers to justice is the only thing in her life worth living for.

So when she sympathises with a vigilante who is exacting sadistic revenge, Berg faces a perilous choice: surrender to the powerful evil inside, or finally acknowledge the past she would rather ignore.

Like Dexter and The Girl with the Dragon Tattoo, The Enemy Inside challenges the concept of justice, asks if the need for vengeance sometimes justifies murder, and explores whether you can ever heal from a broken childhood.

A Chicago mother is murdered in a robbery gone wrong…

A teenager is raped and beaten, her life hanging by a thread…

For Chicago Detective Alicia Raymond, a.k.a Berg, the need for justice burns deep and fills the emptiness when therapy and relationships fall short. And while Berg wages a life or death battle against a sociopath who is always two steps ahead, an old adversary will stop at nothing to end her career.

As Berg fights to prevent another murder, she will cross the line between hero and villain—and there’s no turning back.

Broken follows the series debut, The Enemy Inside, and is now available! 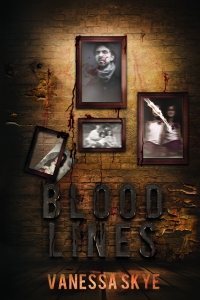 Following the acclaimed debut of The Enemy Inside and its sequel, Broken, comes the stunning conclusion to the ‘Edge of Darkness’ series by investigative journalist Vanessa Skye, Bloodlines.

Detective Alicia “Berg” Raymond is lying. She’s lying to the Chicago Police Department, to her boyfriend, Captain Jay O’Loughlin, but most of all, she is lying to herself—about her past, her future, and her addiction.

As Berg investigates a series of brutal rapes, she juggles finding justice for the victims, keeping her own sordid past buried, and wrapping her damaged head around living in a state of domestic bliss she’s certain she doesn’t deserve.

But when enemies from the past threaten her present, she is once again vulnerable to the demons that have plagued her. It’s only a matter of time before the lies unravel and destroy the fairy tale she’s finally started believing.

Can she save anyone from the lurking darkness or will her own bloodlines drag her under—this time for good?