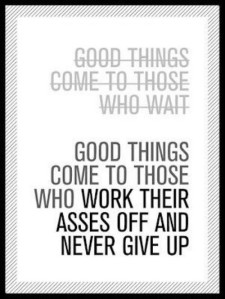 If there’s one thing that is true of writing, and indeed life in general, it’s the absolute requirement to never give up.

Yet so many writers are stymied by the very first stumbling block—be it the first rejection, or their grandma didn’t like it, or someone just put out something similar—and give the entire game away. I shudder when I think of how many bestsellers are buried in a desk drawer somewhere because a moron somewhere (likely an assistant of an assistant of the third letter filer on Wednesdays) didn’t like them.

You may have heard these excuses: ‘It’s all about luck’, ‘People who get published know someone in the industry’, ‘I don’t have time’, ‘I don’t have the right degree/qualifications/the right to express myself creatively’, ‘I’m happy in my horrible job, really.’

And let’s face it, if you don’t believe in you, how can you expect anyone else to?

When I gave up my high-paying, soul-sucking job in PR six years ago, I did so with the firm belief that I wanted to write books for the rest of my life (I had always had this conviction, I just got distracted along the way :)). It was a pretty big leap of faith, and I had to believe in myself.

I’m not the best writer in the world, and my books aren’t going to change society (that’d make for a pretty cracked society), but darn it, if I have one redeeming feature it’s that I never give up.

And if someone tells me I can’t do it (which they have, natch) that just makes me want to do it more. So ner! *pokes out tongue*

Writing is hard. And plonking your still-beating heart down on paper for someone to critique is understandably confronting. But you can’t please everyone, and just because you’ve had 10 ‘nos’ doesn’t mean the next answer isn’t going to be a ‘yes’. Remember, Harry Potter was rejected by 12 publishers before being picked up (bet those other publishers are crying into their unemployment letters now).

But, you can know for sure you’re never going to succeed if you don’t a) finish writing a book, and b) show it to someone.

I’ve said it before (a lot), but it bears repeating: I’d rather die knowing that I tried and failed, than regret having never tried at all.

One thought on “Don’t give up. Not ever.”