Published by The Writers Coffee Shop

When Celeste was kidnapped a century ago and turned against her will by a cruel vampire fighter, she expected to spend her doomed eternity as his slave, chained in the darkness, and she questioned her ability to survive. But things don’t always go as expected.

He never expected Celeste to learn how to fight.

He never expected Celeste to become the best warrior he had ever seen.

He never expected the secret hidden away in her blood,

And he certainly never expected to become a victim of his own sword.

Tormented by her past and the dreams she can’t explain, Celeste now roams the earth slaying the creatures she loathes—other vampires like herself—and seeking revenge against those who would harm innocents in the name of bloodlust.

Until she crosses paths with Striker, the handsome vampire leader weighed down by his own tortured story.

In his quest for answers about the stunning Celeste, Striker finds out more than he ever thought possible—about himself, his true origins, and his destiny. But the secret Celeste is keeping from him might be the one thing that keeps them apart for good—a secret even more dangerous than a new, powerful enemy they never saw coming.

As ancient mysteries, forgotten prophecies, and cruel eras collide, Celeste must confront her past as well as her future. Fighting her inner demons and letting Striker beyond the wall she built around her heart haunts her, even more than her captive past.

Enter a supernatural world of passion, lust, sexual obsession, and power that the unsuspecting humans never knew existed, until now . . .

The vampire silently watched from a balcony near the top of a shiny glass-covered skyscraper, enthralled, as the assassin neatly dispatched three Lore with brutal efficiency.

Two of the three had been beheaded before they’d even known what was happening.

Impressive, really—hard as it is to sneak up on a vampire, let alone deprive one of its head.

Granted, the three Lore rogues had looked young and inebriated—no doubt fresh from snacking on some of the drug-addled humans wandering around the club district in the very early hours of the morning. The chemical-or alcohol-laced blood of high humans was a favorite pastime of the younger generations of vampires, many of whom were reticent to leave human vices behind after their turning.

The third vampire looked shocked and tried to run as his friends met their absolute death, but the assassin was faster—considerably so. The Lore was killed quickly, neatly, and efficiently, without undue blood or relish.

He narrowed his dark brown eyes as he surveyed the assassin’s graceful movements.

The vampire didn’t kill for the thrill, which often happened because psychopaths were common within their species. No, given the calm efficiency, the assassin killed for some other reason that he couldn’t yet fathom.

He had hidden far enough away that the low clicking of his compact digital camera couldn’t be heard.

He zoomed in and refocused, the shutter softly snapping open and closed as the assassin wiped a bloody sword on one of the unfortunate vampire’s clothing before sheathing it.

He stuck around long enough to ensure all Lore—vampires turned by another vampire—had disintegrated into dust. The cold, late-winter wind whistling through the city would eventually scatter their remains across several gray city blocks. He was grateful they hadn’t been hybrids. They left a mess when killed, and a cleaning crew would have been necessary to dispose of the remains before any humans stumbled across them. 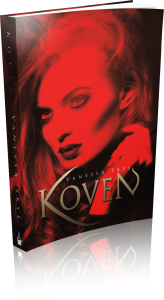 Pressing a few buttons, he examined the camera’s small screen critically. The leathers covering the assassin from head to toe made any facial features unidentifiable in each of the shots, but they were tight enough to leave no doubt.

He was surprised and a little excited. Female vampires were increasingly rare, let alone one who fought as well as she did.

The wind moaning between the high-rise and its tall neighbor wasn’t enough to muffle the soft thud of footfalls from his sharp ears. He didn’t turn, however, because the intruder’s scent was familiar.

“Striker, are you following her again?” Bradford, Striker’s second-in-command, asked.

Striker reluctantly pulled his gaze away from the camera’s screen and turned slowly. “Yes. What of it?”

Bradford raised an eyebrow. “Surely you’ve got enough evidence against her to report to Kouncil by now. Why the extra surveillance?”

Bradford ran his hands through his wavy red hair before shrugging his heavily muscled shoulders. “I’m aware it’s not my job to question—”

“You got that right.”

“Just wondering if you can afford the extra time. Kovens don’t run themselves, you know.”

Striker shrugged, slipping the camera into the pocket of his leather jacket. “I find her . . . fascinating.”

Bradford snorted. “Don’t let your never-ending drive for pussy cloud your judgment. The executioner’s noose is over her head, and you know it. Kouncil wants blood. She risks exposing us all with her activities.”

“You should see how she fights. She’s quick, effective . . . deadly,” Striker said, waving toward the female, who was scooping up empty clothes and placing them in a nearby dumpster. “And she’s cleaning up after herself, as you can plainly see. She poses no threat to us. On the contrary, she could be useful.”

Bradford stared at the woman, wrinkling his fair, white brow. “How old do you think she is?”

“She is too fast to be a hybrid. She doesn’t appear to be able to fly yet, so Lore less than a century old is my guess.”

“Less than a century?” Bradford narrowed his ruddy-colored eyes. “Good. She should be easy to capture and destroy, then.”

Striker clenched his fists. “Do not be so quick to destroy that which you don’t understand, brother. She could be a valuable asset.”

Bradford scoffed. “There is no way Kouncil will ever allow a female to join Koven. Nor will they forgive her for such . . . unseemly pursuits.”

“As much as they might like to think otherwise, it’s not up to Kouncil. It’s up to me who joins my Koven. Besides, fifty years ago they said the same thing about the hybrids, and now they are becoming members of our ranks as fast as they mature.”

Bradford let out a single bark of laughter. “Yes, you went against their wishes and allowed hybrids into Koven, and Kouncil is still pissed off about it! Because of you, they were forced to relax the ban on human and vampire relations, as well as the half-breeds sometimes resulting from them. All to boost our ranks. Vampire numbers are dwindling lower than ever before, and you know from personal experience that the turnings don’t always take, particularly for wome—” Bradford glanced at Striker and winced but pushed past the awkward moment quickly. “Don’t mistake their tolerance of hybrids after centuries of culling them with acceptance. They cannot stand the mongrels. They still call them Tiks, for fuck’s sake! They move about the sunlight without any discernable loss of strength, unlike Kouncil themselves.” Bradford shook his head. “It would be unwise to anger them so soon after a significant loss of face. They’ll never join the rest of us in the twenty-first century. They’re marred too deep in the old ways and prejudices. I often wonder why we sacrifice our strongest vampires to protect them. Would we be so much worse off if we let nature take its course?”

Striker shrugged. “My maker used to ask me the same thing, and I honestly have no good answer. Tradition, maybe? Koven has been the right hand of Kouncil for millennia. But they’ll join us in modern society if I have to drag them kicking and screaming myself. You’ll see.”

Bradford huffed and cut his gaze sideways at Striker, clearly irritated. “Sadly, brother, I think you will see, and when you do, you won’t like it.” Running for the edge of the high-rise, he jumped, disappearing into the dark sky.

Striker turned back to his contemplation of the female.

He noticed she had returned everything to it pre-slaughter state, and resolving to follow her, he launched himself into the sky and flew above as she darted on foot through city alleys and quiet streets. He tracked her easily and hoped she would lead him to her keeper. It would allow his men to find her much easier later, should he wish to arrest her.

Kouncil had sent him specifically to identify and gather evidence against the lone assassin killing rogue vampires—Lore and hybrid alike—indiscriminately and without permission. His instructions had not included rescue or engagement.

Vanessa Skye has always had a love of words and spent her school years writing poetry, speeches, and fictional essays.

After completing a Bachelor of Arts in print journalism and studying psychology at Charles Sturt University, Vanessa got a job at Rural Press—Australia’s largest publisher of regional and agricultural news and information—where she worked as a journalist in the Central West of New South Wales for four years.

Thousands of stories later, Vanessa decided to move back to Sydney and try her hand at public relations while studying for her master’s in communication.

Skip forward a few years, and Vanessa once again found herself joyfully studying various psychology subjects while managing a Sydney public relations firm. Enthralled with examining the motivations behind people’s actions, Vanessa realized what she really wanted to do in life was combine her love of words with her fascination for human behavior. So Ms. Skye quit public relations to begin the significantly more impoverished life of a professional writer.

Inspired by a recurring dream, Vanessa wrote her crime fiction debut, The Enemy Inside, which challenges the concept of justice, asks if the need for vengeance sometimes justifies murder, and explores whether you can ever heal from childhood abuse. The second book in this series, Broken, was released in February 2014, and the third, Bloodlines, was released in January of 2015. The first book in a paranormal series, Koven, will be released in June 2015. In her spare time, Vanessa wrote a short story, The Piece, which was published in February 2012 by Dark Prints Press as a part of the One That Got Away dark fiction anthology.

Vanessa now works as a freelance writer, lives on Sydney’s northern beaches, and tries to immerse herself in salt water at least once a day.

~~CONNECT WITH THE AUTHOR~~

Error: Twitter did not respond. Please wait a few minutes and refresh this page.